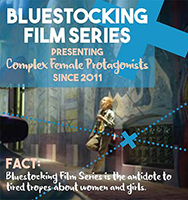 Join us in Bloomington, Indiana at the IU Libraries Screening Room at 7:00pm on Thursday, October 19 for Bluestocking's 2017 touring program of 8 female-driven, Bechdel-Wallace tested short films.

The film lineup includes 8 short films from across the U.S. and around the world. Genres include cerebral sci-fi, wry comedy, and serious drama. The program approximate running time is 105 minutes.

This event is part of the ongoing #DirectedbyWomen celebration of women directors and their work.

REAL ARTISTS
Cameo Wood, director/producer / Ryon Lane & Alexa Fraser-Herron, co-producers
Synopsis: Set in the near future, and based on Ken Liu’s short story of the same name, Sophia has just scored every animator’s dream. But in order to maintain her artistic integrity, it’s going to take all of Sophia’s instincts and nerve.

RHONNA AND DONNA
Daina Pusic, writer-director / Helen Gladders, producer
Synopsis: How are you supposed to act when you are conjoined at the hip?

SHAUNA IS A LIAR
Chell Stephen, writer-director / Kristy Neville, producer
Synopsis: An isolated, imaginative, perfectionist exacts ill-conceived revenge on all liars of the world via the one target she has access to: a classmate sharing her name.

THEY CHARGE FOR THE SUN
Terence Nance, director / Eugene Ramos, writer / Guilia Caruso, Kady Kamakaté, Ana Souza, producers
Synopsis: In a dystopian future where people live nocturnally to avoid the harmful rays of the sun, a young black girl unravels the lie that has kept her and her sister in the dark.